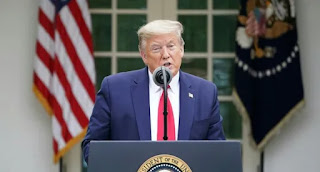 United States President Donald Trump on Tuesday announced the suspension of US funding to the World Health Organization because he said it had covered up the seriousness of the COVID-19 outbreak in China before it spread around the world.

Trump told a press conference he was instructing his administration to halt funding while “a review is conducted to assess the World Health Organization’s role in severely mismanaging and covering up the spread of the coronavirus.”

According to Trump, the WHO prevented transparency over the outbreak and the United States — the UN body’s biggest funder which provided $400 million last year — will now “discuss what to do with all that money that goes to the WHO.”

“With the outbreak of the COVID-19 pandemic, we have deep concerns whether America’s generosity has been put to the best use possible.”