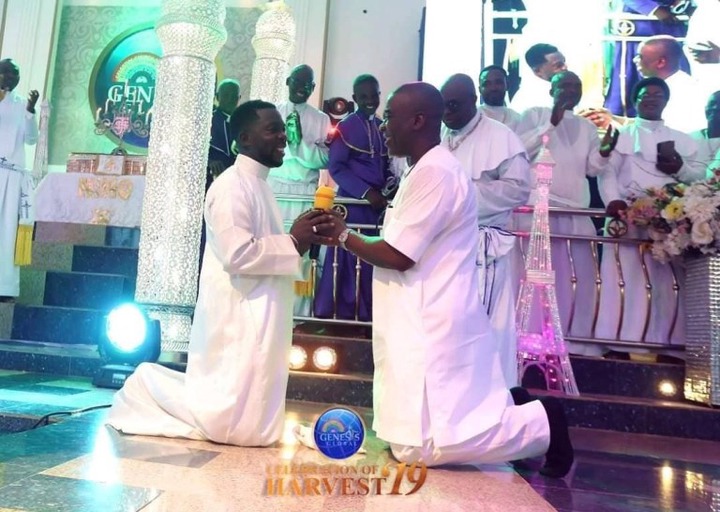 The last has definitely not been heard of issues that have continued to arise from the hosting of Fuji music star, King Wasiu Ayinde Anifowoshe Marshal, popularly known as K1, at the 2019 Harvest Programme of the Celestial Church of Christ, Genesis Global under the leadership of Senior Sheperd-in-Charge, Prophet Israel Oladele Ogundipe, on 15th December, where the famous singer performed on the altar for over an hour.

An attempt to sanction the Senior Sheperd-in-Charge better known as Genesis has apparently kick-started what could allegedly turn out to be a domino of problems withing the Celestial Church fold in Nigeria.

According to the feelers reaching this writer from reliable sources, the National Headquarters of the Celestial Church in Imeko, a suburb of Ogun State (South West Nigeria) after the incident of K1’s performance considered as desecration of the altar, attempted to invite Genesis to come and face disciplinary actions on two offences.

One being the K1 issue, and the other being an offence of bigger magnitude which concerned some actions of one Cardinal James Omolaja Odumbaku popularly known as Baba Eto in both Celestial Church and Lagos political circles, who also attended the Genesis programme in contention tagged “Harvest of Massive Mercy”.

But how exactly did Baba Eto (CCC, City of God, Ojodu) got involved in an infraction worthy of counting against Genesis?

This is how. When K1 (the Fuji musician) was about to drop the microphone on the day of the harvest to bring his electrifying performance to an end, Baba Eto made a grand entry into CCC, Genesis Global, which K1 was not initially aware of.

But one of his band men rushed to him on the altar on the stroke of the time he was handing over the microphone, and the message that Baba Eto had just stepped in was apparently whispered into his ear.

Hence, instead of going ahead to hand over the microphone, K1 stepped back with it to begin a special rendition in honour of Baba Eto who just stepped in. But that was not really the second offence.

The real offence was two pronged. One was that as against the doctrine of the Celestial Church, Baba Eto wore his cap into the Church.

It was said that he should have ordinarily taken the cap off before entering the Church as a norm. As if that was not enough, Baba Eto allegedly went on to commit a more grievous offence inside the altar.

There are reportedly 2 special chairs above the altar in all Celestial Church parishes which are reserved exclusively for some elemental beings.

It is any of his descendants who has taken over the leadership of the Church who currently is Rev. Pastor Mobiyina Oshoffa, is allowed to sit on that revered seat whenever he is on visit to any Celestial Church Parish.

But lo and behold, after K1 had made obeisance to Baba Eto (Cardinal James Omolaja Odunmbaku) while still singing his praises, and Genesis had equally come to prostrate for him before hugging him on the altar, Baba Eto allegedly went straight to sit on the chair reserved only for the person leading the Celestial Church worldwide.

In the doctrine of the Church, that is what it was said to be, abomination.

The International Headquarters wondered why Genesis (Dele Ogundipe) did not ask Baba Eto to immediately vacate the seat as he already committed abomination.

And Genesis reportedly sent words back to the Headquarters that Baba Eto was too big in the Celestial Church for him to have challenged him like that.

For one, he was quoted to have said that Baba Eto too heads a Celestial Church Parish and well aware of the sacredness of that particular chair. So, he must have some reasons best known to him to have sat on it.

And again, Genesis was said to have argued that late Oshoffa’s wife was in the Church as a guest that day too. So, why did she keep quiet instead of raising issues on Baba Eto, sitting on the sacred chair.

But the Headquarters was said not to be ready to hear any of his excuses. They sent for him to show up personally at the Headquarter to answer to the crimes he allegedly engineered against the Celestial Church.

But Genesis was said to have responded to them that he would not come because he had not committed any crime whatsoever. So, it was a ding dong affair between Genesis Global and the International Headquarters for days.

Meanwhile, the Church service after the incidents which was held on Sunday, 22nd of December, Genesis (Dele Ogundipe) reportedly told his congregation that he was withdrawing his Church from the main body of the Celestial Church to stand alone.

Also Read This  Prophet Arrested In Imo For Killing Church Member, Dispose Him Of His New Car

He allegedly asked those of his members who want to stay with him to stay and those who were willing to go away with the main body to do so on their own volition. And as a result of that said secession, the main body of Celestial Church was said to have instituted a court action against him on the matter.

How that would pan out in the coming days remained to be seen.

In a strong demonstration of his resolve to secede, members of Genesis Global Parish were said not to have taken part in general worship by all the Celestial Church members in the country every year which starts few days before Christmas and ends on Christmas day at the Celestial Church Spiritual city of Imeko in Ogun State.

As it is, the battle line is apparently drawn and the last has not been heard of the matter.

I need a man in my life – Bisola