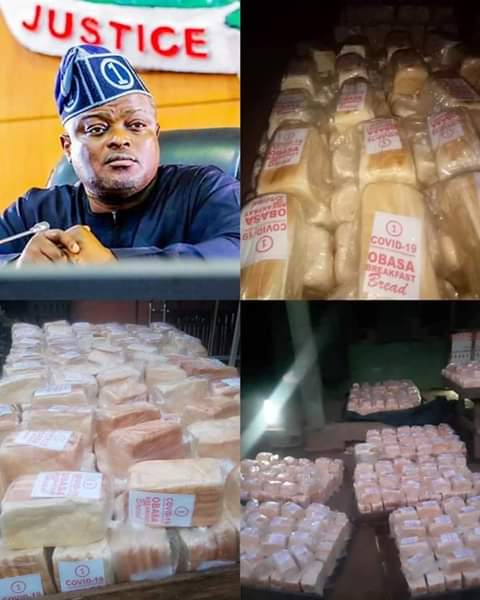 The breakfast gesture by the Speaker of the Lagos State House of Assembly, Rt. Hon. Mudashiru Obasa, has been boosted with a donation of N10 million.

The individual donations came from well-meaning residents of the state, who said they were encouraged by the Speaker’s single-handed assistance to the people at a time of economic distress caused by COVID-19.

The donors include Lagos businessman, Adebiyi Olalekan, who contributed N5 million and another popular businessman, Taiwo Elegbede, who donated N200,000.

Other donors include Sunday Babatunde, who dropped N1 million, Hon. Nureni Akinsanya and Afolabi who contributed N300,000 and N200,000 respectively.

Obasa, who had shared 10,000 re-bagged rice at the inception of the lockdown in the state caused by COVID-19, initially started with the distribution of 26,000 loafs of bread around the Agege area of the state.

Following wide demand by the residents, the Speaker continued with a daily distribution of loaves of bread across the area which also houses his constituency.

Meanwhile, residents of neighbouring Local Government Areas as well as Local Council Development Areas (LCDA) have called on the Speaker to extend the gesture to their areas.

The residents said the plea follows their understanding that Obasa is not just the Speaker of his constituency or Agege area, but the entire Lagos.

While commending the Speaker for the gesture, which they say has a way of meeting an aspect of the daily needs of the beneficiaries, especially during the lockdown, they said they would remain grateful if he extended the palliative to them.

Obasa: The Yoruba Man Who Predicted Amotekun years Before Its Started