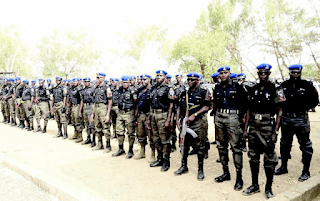 The 10,000 constables recruited by the Nigerian Police have reported for training in the 18 police training colleges across the country.

An Abuja High Court had ordered Nigerian Police and the Police Service Commission (PSC) to stay action on the recruitment exercise pending the determination of the suit filed by PSC challenging the conduct of the training exercise which it said was usurpation of its constitutional powers.

But the Nigerian Police last weekend released the list of successful candidates in defiance of the court order and instructed them to report for training Monday or forfeit their admission.

It was gathered that some of the recruits were charged N11,000 for training kits in spite of the fact that money for the training was already budgeted for.

Some trainees in one of the colleges in the South-east and North-central, who spoke  on the condition of anonymity, said they were asked to pay the sum of N11,000 for the provision of training kits.

“In our college they asked us to pay N11,000 for iron bucket, lamp, plates and cutlass with passport. They said without the money, they won’t let us into hostel”, a trainee said.

Another recruit said “a lot of people are seriously paying the money and obtaining their hostel at the same time and some people are just outside.

“They refused to let us in. I called my grandparents and they said they don’t have money. I am just outside. I don’t even have an option”.

A source said that such charges were illegal and dubious. “The training is budgeted for. There is a provision for training at any given time. Those charging them for training are engaging in an act of criminality”.

Calls and text messages sent to Force Spokesman and Deputy Commissioner of Police (DCP), Frank Mba, were not replied.