The Ukrainian three-weight world champ, 32, is rated as the one of the best pound-for-pound fighters around.

This weekend, Loma goes head-to-head with Teofimo Lopez in a lightweight bout in Las Vegas.

And you can be sure the favourite might’ve prepared for the fight in the most unique way.

The southpaw, who boasted an incredible 396 amateur wins before he went pro also, uses maths puzzles, folk-dancing, and holding his breath underwater to defeat his opponents.

Despite showing a promise for boxing from the age of four Lomachenko’s father Anatoly was adamant that his son should start dance classes.

It was a ploy by his dad, part martial arts sensei part Buddha, to help Loma improve his footwork, as he later understood.

“I didn’t understand at that time,” Vasyl told Sports Illustrated.

Years later, Lomachenko was back in the boxing gym and working with pads – improving his hand speed and punching power. 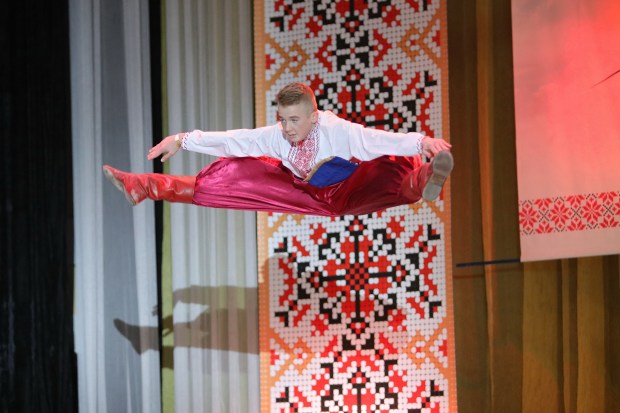 Originally, a male dance created by the Zaporozhian Cossacks, it is now performed in countries including Belarus, Russia and Poland.

The name is derived from the word ‘hopaty’ which means hop.

A typical movement of the dance is leaping through the air and touching your toes.

While performers are also known to squat while balancing on one leg.

The traditional costume worn by the dancers consists of pantaloons and colourful boots.

Lomachenko, who has a 14-1 professional record, chooses unorthodox training measures to beat his foes.

Before he defeated Luke Campbell at The O2 Arena last year by unanimous decision he was particularly interested exercising his mind.

He would complete complex maths equations and word puzzles to strengthen his thought process.

To improve his physical attributes, he raced against his pet German Shepherd on the beach, would punch a tennis ball tied to a baseball cap, and held his breath underwater for four minutes.

As an amateur, Lomachenko got plenty of practice in.

Astonishingly, he won 396 of his 397 fights – making him one of the most prolific amateur fighters of all time.

That one blemish on his record – was a defeat to Albert Selimov.

However, Loma managed to avenge the defeat twice to reign supreme.

And success followed – winning gold at both Beijing 2008 and London 2012 – two golds at the World Championship, and another further two at the Europeans.

HE LOST TO AN UBER DRIVER

Despite appearing (almost) unbeatable, Lomachenko does have that one defeat against his name… and it was to an Uber driver!

In 2014, he fought against Orlando Salido for the vacant WBO Featherwight title.

The Mexican went into the fight having already lost 12 times.

To compliment his boxing, Salido would take Uber fares on the side for some extra cash.

He is probably the most intimidating Uber driver ever.

When boxing takes a backseat, Lomachenko is at ease on the lakes.

His favourite hobby is fishing and he regularly shares images on Instagram of some of his catches.

Loma also loves ice hockey – a sport he would love to have become a professional in.

But it’s a low-key existence for him, which is why he trains in a small gym in Oxnard, California – away from the glamour of LA.

When the cameras are rolling on Saturday though, expect this modest fighter to live up his billing as box office.

How I Stole iPhones At Osun Mall – Suspected Looter